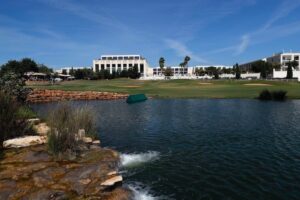 Europe’s top golfers will be teeing up in a crucial DP World Tour event in the Algarve later this month. The Portugal Masters (27-30 October) is the fourth leg of this year’s “Iberian Swing”, following events in Madrid, Sotogrande (Valderrama) and Mallorca, and also the final tournament for players to secure their Tour cards for 2023.

The €2 million event became a part of the then European Tour in 2007 and has been held at the Arnold Palmer-designed Dom Pedro Victoria Golf Course in Vilamoura since its first edition.

“Dom Pedro Victoria Golf Course has provided plenty of drama and excitement over the years,” said Ben Cowen, chief tournament business officer for the DP World Tour, “so we are delighted to be returning for the 16th consecutive staging of the Portugal Masters. We appreciate Turismo de Portugal’s long-term support of this tournament, which showcases Portugal to our global audience.”

Added Stefano Saviotti, chairman of Dom Pedro Hotels & Golf Collection, “The Portugal Masters is an extremely important showcase of golf in the Algarve and we are pleased to welcome the world’s finest golfers to the Dom Pedro Victoria Course… This has been a great year for Dom Pedro Hotels & Golf Collection, and to host the DP World Tour Tour once more in our golf course and hotels allows us to confirm why Vilamoura has a reputation as one of Europe’s most requested golf destinations.”

Also welcoming the new staging of the event, Turismo de Portugal president Luis Araújo said, “Portugal has been consolidating its international prestige as a premium golf destination, which is mainly down to the quality and diversity of courses offered throughout the country.

“The numerous awards and distinctions that we have collected only serves to confirm this, and the confidence that the DP World Tour places in the country takes on a special importance. In each of the last 15 years, Portugal has hosted one of the tournaments on the Tour’s calendar, the Portugal Masters. To once again host this internationally renowned event confirms that Portugal not only has the perfect conditions for casual golfers to play and practice, but also the capacity and facilities to host professional events of the highest international standard.”

Thomas Pieters has confirmed he will be defending his title in Vilamoura. In 2021 the Belgian carded a three-under 68 in the final round to finish two strokes clear of Danish pair Lucas Bjerregaard and Nicolai Højgaard and Frenchman Mathieu Pavon.

“I’m very excited to return to Vilamoura,” he said. “I’m really proud of last year’s victory and how I closed the tournament out. It had been a little while between wins but my caddie Adam and I had worked really hard during those two years, so it felt like it was a title that we really deserved.

“The Portugal Masters will be my final event of the season as my partner and I are expecting our second child in November, so I’m hoping to finish my year on a high note. With Ryder Cup points now up for grabs, there’s an added incentive to perform well in each event we play as I would love to have the opportunity to represent Europe again.”

The Portugal Masters will be the final counting event for the 2022 DP World Tour rankings, with the top 110 players on the season-long standings confirming their playing privileges for 2023.

Season passes and single-day tickets for the tournament are available here.