History Made at Formula 1 Grand Prix in the Algarve

It didn’t begin all that well for Mercedes’ Lewis Hamilton when the green flag went up for the start of the Portuguese Grand Prix in the Algarve. The British racing star almost immediately lost his pole advantage, being passed by both Finnish teammate Valterri Bottas and McLaren’s Carlos Sainz during a dramatic first lap, with the Spaniard taking the lead a lap later.

Once the Mercedes drivers fired up their medium tyres, however, Bottas and Hamilton resumed battle out front. On lap 20, Hamilton regained the lead and only briefly lost it in the pits before securing the chequered flag after 66 laps. His 25.592-second lead at the finish over second-placed Bottas was the largest winning margin of the year. Red Bull Racing Honda’s Max Verstappen completed the podium.

The victory, at the Autodromo Internacional do Algarve in Portimão, moved Hamilton to a record 92 Grand Prix titles, overtaking Michael Schumacher, who retired in 2012 and has been rehabilitating and not seen in public since suffering a severe brain injury in a skiing accident in 2013. The German won seven world championships during his career, while 35-year-old Hamilton (a six-times champion, in 2008, 2014, 2015, 2017, 2018 and 2019) is well on target to match that tally this year as he has a solid 77-point lead in the driver’s standings with just five races left: Italy this weekend, then Turkey (13-15 November), Bahrain (27-29 November and 4-6 December) and Abu Dhabi (11-13 December).

Of the 11 races up to Portugal, Hamilton had won seven, Bottas two, and Verstappen and Pierre Gasly (Alphatauri Honda) one each. Mercedes-AMG Petronas (435 points) leads Red Bull Racing (226) by 209 points in the constructors’ championship, with 220 points still to be scored this season. Racing Point BWT Mercedes is third on 126. 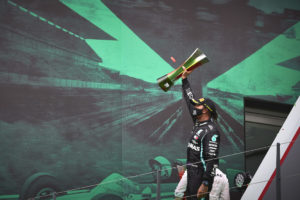 After the Algarve race, Hamilton said, “First, I owe these 92 wins to the team here and back at the factory for their tremendous work. They are continuously innovating and pushing the barrier, even higher every year. It’s been such a privilege working with them and I am so grateful for all the moments.

“Today was tough. It was all about tyre temperatures today and that’s something I was able to, with the set-up, I pre-empted it. They said it was going to rain only after the race would be finished, but we got some drops at the start and going into turn seven there was a huge oversteer moment and then you didn’t know what was next. I really backed up massively and I should have probably defended from Valtteri, but I said to myself that I’d come by later and fortunately that’s what I was able to do.

“It’s an incredibly physical sport but I had a cramp in my right calf and I had to lift quite often down the straight because it was about to pull. Pretty painful, but I had to get through it because it is what it is and you can’t lift the whole lap!

“I could only ever have dreamed of being where I am today. I didn’t have a crystal ball when I chose to come to this team and partner with these great people. What I can tell you is that I am trying to make the most of it every single day. Everything that we do together, we are all rowing in the same direction and that’s why you’re seeing the success that we’re having.

“My dad is here, which is amazing; my step-mum Linda is here, Roscoe (his bulldog) too. I feel very blessed. It’s going to take some time for it to sink in. I was still pushing flat out coming across the line and I am still in race mode mentally. I can’t find the words at the moment.”

Later this month later (20-22 November) the Autodromo Internacional do Algarve will host the final FIM MotoGP World Championship Grand Prix of the 2020 season.