The world’s leading private airport operator has launched a major reforestation project in the area near Faro Airport as part of a global initiative.

The Algarve project is being undertaken by VINCI Airports’ subsidiary ANA, which holds the concessions for Portugal’s 10 airports, including Faro. It is one of two reforestation projects most recently initiated by VINCI – the other being near Porto Santo airport in the Madeira archipelago.

These new projects are part of a global reforestation programme that VINCI Airports set in motion last June at Lyon-Saint Exupéry airport with the Rhône departmental council and French National Forest Office (ONF). 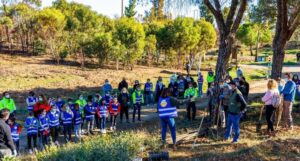 In the Algarve, about 20 kilometres from Faro Airport, the work involves a restoration of Tavira forest, which was damaged by wildfires last summer. According to Vinci, the project will last 30 years and is being carried out with the Algarve region’s coordination and development commission, Tavira city council, the national association for the conservation of nature (Quercus) and the Institute for Nature Conservation and Forests. A total of 2,500 cork oaks, carobs, holm oaks and junipers are being planted.

“VINCI Airports is becoming involved in reforestation in all the geographies where we operate,” said Nicolas Notebaert, CEO of VINCI Concessions and chairman of VINCI Airports. “Forests are not just our allies in efforts to help decarbonise mobility: they are also fantastic reservoirs of biodiversity. Protecting fauna and flora goes hand in hand with promoting informed and sustainable tourism, especially in these beautiful parts of Portugal.” 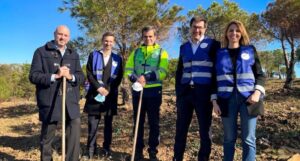 VINCI Airports manages 45 airports in 12 countries in Europe, Asia and the Americas. “We harness our expertise as a comprehensive integrator to develop, finance, build and operate airports, while leveraging our investment capability and expertise in optimising operational performance, modernising infrastructure and driving environmental transition.

“VINCI Airports became the first airport operator to start rolling out an international environmental strategy, in 2016, with a view to achieving net zero emissions throughout its network by 2050.”

The Algarve is recognised as the “World’s Leading Beach Destination”.