Two major sporting events are being held in the Algarve this week. Grand Prix motorcycling returns to the region from Friday to Sunday (5-7 November), while the Portugal Masters starts at the Dom Pedro Victoria course in Vilamoura tomorrow (Thursday).

The penultimate leg of the 2021 MotoGP World Championship will be held at the Autódromo Internacional do Algarve (AIA) in Portimão, where Lewis Hamilton won a second consecutive Portuguese Grand Prix back in May.

Legendary Italian veteran Valentino Rossi will be making his farewell in the race, while Portugal’s own Miguel Oliveira will be hoping to treat local fans to another celebratory lap after his victory on the Algarve circuit in 2020.

Away from the racetrack, local tourism enterprises are taking the opportunity to showcase the area’s diverse attractions. These include a visit to the Morgado do Quintão Vineyard for motorbike enthusiasts, who are invited to visit on their own motorbikes and ride through the vineyard on a circuit set up around the 50-hectare property, stopping at checkpoints to learn about each of the different grapes, before enjoying a lunch and wine tasting under their 2,000-year-old olive tree.

For tourists planning to visit the Algarve at a later date, the vineyard organises other special events throughout the year. 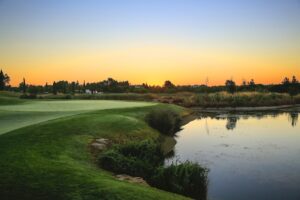 Meanwhile, 50 kilometres away, leading European Tour players will be aiming to win the 15th edition of Portugal’s premier golfing trophy.

Defending champion George Coetzee is back at the Arnold Palmer-designed course, as well as several 2021 champions including Danes Nicolai and Rasmus Hojgaard, who made history earlier this year when they became the first brothers to win in consecutive weeks on the European Tour.

Also teeing up is three-time major championship winner and 2016 Portugal Masters champion Padraig Harrington, who said on the eve of this year’s tournament, “I always enjoy playing the Portugal Masters. It’s a fantastic tournament, generally played in lovely weather and there’s always a good atmosphere.”

Welcoming the players and fans to the region, Algarve Tourism Bureau president João Fernandes said, “The Portugal Masters is one of the biggest events of the year for the Algarve and is the ideal opportunity for us to showcase everything that we have to offer in our wonderful region.

“The recent pandemic has presented many challenges but, from the positive feedback that I have received from our courses, the golf market is now recovering strongly and the signs are very good for the future, which is very encouraging.”