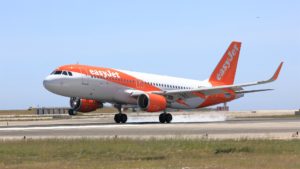 Faro Airport is to play a key role in EasyJet’s expansion plans for 2021. The airline company has announced it will open two new seasonal bases in time for next summer: in Faro, the gateway to southern Portugal’s Algarve region; and Málaga-Costa del Sol in Spain.

According to EasyJet, “The new bases will allow the airline to better respond to higher customer demand over the summer, with plans to become operational next spring and operating over the summer season to the end of October.” Faro will become the third base in Portugal, after Lisbon and Porto.

The addition of Faro and Málaga (which joins Barcelona and Palma de Mallorca already established in Spain) means EasyJet will be operating from 28 bases across its network. Both important markets for the company, Spain and Portugal represented around 26 per cent of all EasyJet passengers in the last financial year, with eight million passengers to and from Portugal and 18.5 million for Spain in 2019.

Announcing the base expansion, EasyJet group markets director Thomas Haagensen said, “We are very pleased to announce the opening of a third base in both Portugal and Spain next summer. Despite the difficult environment that the whole industry is navigating through, this move confirms our commitment to these two popular destinations and will enable us to better serve our customers by optimising our schedule over the summer season as well as making a positive economic contribution to each region.”

Speaking to reporters, EasyJet’s executive director in Portugal, João Lopes, said the airline would allocate three aircraft to Faro next year, and it hoped to operate 17 international routes to and from Faro between March and October 2021.

He said EasyJet wanted to “be able to react as soon as the recovery starts… and reinforce tourism in Algarve… We want to avoid 2021 being a year of losses, as 2020 was, and it may be the first year of recovery.”

Earlier this month, EasyJet revealed that its first ever annual loss could be as high as £845 million (€934 million) as it was flying just 25 per cent of planned capacity.

In 2019, an estimated two million British tourists visited Portugal, and 64 per cent of them travelled to the Algarve. This year so far, the total has dropped to 100,000, even though the popular holiday hotspot has not been as seriously affected by the coronavirus pandemic as other northern parts of Portugal – and elsewhere in Europe.

Commenting on the base announcement, Portuguese economy minister Pedro Siza Vieira said EasyJet’s investment in Faro was especially important “at a time air transport is going through the greatest crisis in history”.

For comprehensive up-to-date information about EasyJet (and other airline) flights to and from Faro Airport, click here.