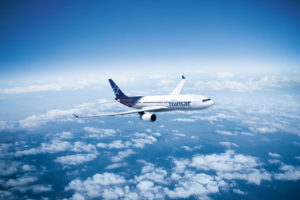 The Algarve will be further boosting its air connections this summer, with a first intercontinental flight during the high season and a new Brussels route.

Scheduled by Air Transit, the flight between Faro and Toronto (Canada) is an extension of an existing route that has been operating weekly from 15 January and 28 April. Now, the summer period will include 29 more flights scheduled from 8 May to the end of October, according to the Algarve Tourism Association.

The Canadian airline operates its winter flights from Toronto on Tuesdays, while summer flights are scheduled for Fridays, returning the same day from Faro. In Toronto there are connecting flights to Vancouver and Montreal, for ongoing travellers wanting to take advantage of the new Faro route.

The Toronto route will comprise 11 frequencies with an Airbus A330 and 18 with the new Airbus A321LR, which, notes the ATA, “was one of the deciding factors that made it possible to extend the connection”.

Canada is a growing market in the Algarve, with latest figures highlighting significant increases in the number of visiting guests and overnight stays. During their visits to the Algarve, says ATA, Canadian tourists tend to stay for long periods, just one key factor that is helping to mitigate the seasonal nature of tourism in the popular southern Portuguese region.

Meanwhile, Transavia has announced that Faro will be one of nine destinations from Brussels offered this summer. The others are: Alicante and Ibiza (Spain), Verona (Italy), Corfu, Heraklion and Thessaloniki (Greece), Tel Aviv (Israel) and Agadir (Morocco).

“We continue to look for opportunities to strengthen our position,” said Transavia commercial director Erik-Jan Gelink. “Our research indicates that there is a gap in the market from Brussels for low-cost leisure travel which Transavia can fill. A significant part of our current customers and our existing B2B customers already come from Belgium and the southern Netherlands. That is why we see starting routes from Brussels as a great step to continue to meet our customers’ needs in Belgium and the Netherlands with a number of fantastic destinations.”

Transavia noted that Faro is the “gateway to the beautiful Algarve region, situated on perhaps the most beautiful coast in Europe. Wide golden beaches located on rugged rocks, picturesque Portuguese towns, delicious fish restaurants and a fantastic climate… everything that the Algarve is so famous for”.

Tickets for Faro and the other destinations can be booked now, and the first flight is scheduled to depart on 30 March.

For more information about flights to and from Faro Airport, click here.