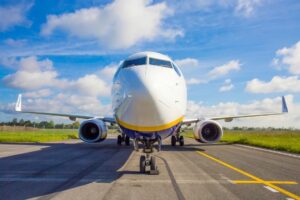 Eighteen new routes for Faro and Porto are planned by Ryanair as part of the airline’s “biggest-ever” summer schedule for 2023. This includes a new route from Exeter Airport, with twice-weekly flights to Faro due to start from 4 June next year and run throughout the summer season to late October.

The company says it will also base two additional aircraft at Faro and Porto (four in total) to help drive year-round tourism to regional Portugal.

“Regrettably airport charges have significantly increased at Lisbon, Madeira and Azores, putting growth – especially for two island-based economies completely dependent on tourism – at risk. We are calling on ANA and ANAC today to extend reduction in charges to all airports to encourage growth and boost tourism, Portugal’s number one economic driver.”

Earlier this month, Ryanair announced it would be expanding its schedule from Exeter Airport, with the Faro launch added to year-round flights to Alicante and Málaga in Spain. According to the low-cost airline, the last time flights operated from Exeter to Faro was in 2019, with Flybe.

“This is great news for passengers,” said Exeter Airport managing director Stephen Wiltshire, “and adds another great destination to Exeter Airport’s schedule for next summer. Faro has always been a popular route and I’m sure passengers will be delighted to see its return.”

Added Dara Brady, director of digital and marketing for Ryanair, “We are pleased to announce this new route from Exeter to Faro for summer 2023, giving our Exeter customers greater choice when planning their upcoming summer holidays to the beaches of the Algarve.”

Another airline with “big” plans for Faro Airport is British Airways, which has just announced its own special holiday sale.