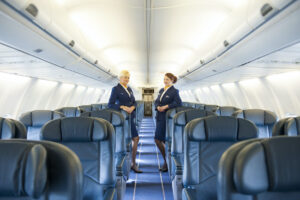 Four new routes have been added to Ryanair’s winter schedule for Faro Airport, linking the Algarve with Frankfurt Luxembourg, Madrid and Nuremberg.

In total, the low-cost airline has scheduled 30 routes for this winter. Due to run until 23 March, these also include destinations such as Marseille, Milan, London and Paris.

“We are pleased to announce our biggest ever winter schedule for the Algarve, which includes four new routes to Frankfurt, Luxembourg, Madrid and Nuremberg,” said Elena Cabrera, Ryanair’s country manager for Portugal and Spain. “This winter, Ryanair is offering its Algarve customers/visitors lower fares and reliability with its winter travel plans, as it operates 3,000 flights daily.”

In September, Ryanair announced that a winter route from Cardiff to Faro would start from 30 October, operating on Wednesdays and Sundays.

Ryanair has also launched its annual gift cards in the countdown to Christmas. Starting from €25, they are available as either a digital gift card sent straight to a customer’s inbox or, “for those looking for something extra special”, a physical gift card with an inscribed personal message and delivered to their front door.

“With Christmas just around the corner,” said director of marketing, communications and digital Dara Brady, “Ryanair’s new physical gift cards have landed right on time (as Ryanair always does), making for the perfect gift for friends and family planning to getaway in the new year – or at least 75 per cent of people surveyed would say. Spend Stephen’s Day deciding where to take your next trip from a choice of over 225 destinations across 36 countries on Ryanair’s unbeatable low-fare network.”