Strengthened Commitments to Sustainability by Airlines Operating at Faro Airport

Three of the main low-cost airlines operating at Faro Airport have consolidated their commitments to sustainable travel.

EasyJet has revealed a roadmap to achieve net-zero by 2050, Ryanair has become the first airline In Europe to sign up to Citi’s new “Sustainable Deposit Solution”, and is once again partnering with the “Renature Monchique” project in the Algarve, and Wizz Air has joined the Alliance for Zero-Emission Aviation (AZEA).

Launching what it described as “the aviation world’s most ambitious plan to achieve net-zero carbon emission by 2050”, EasyJet said its new roadmap comprised a plan highlighted by a series of key elements.

To achieve the “ultimate ambition to be flying on zero carbon emission hydrogen-powered aircraft”, Easyjet reported that it was already working with partners across the industry, including Airbus and Rolls-Royce, on several dedicated projects to accelerate the development of zero carbon emission aircraft technology.

“This is complemented by carbon removal technology to physically remove carbon from the atmosphere and Sustainable Aviation Fuel (SAF) as an interim measure, as well as building on work the airline is already doing to make its everyday operations ever-more fuel efficient and advocating for airspace modernisation, to reduce the use of fuel by flying more direct routes.”

The announcement followed research by the company that found that 76 per cent of the public are actively seeking to reduce the impact of their travel plans on the environment. The top 10 actions Britons undertake to help the environment when flying abroad are:

“Challenging the status quo is in EasyJet’s DNA,” said CEO Johan Lundgren. “Today, we’re the first airline to outline an ambitious roadmap in which zero carbon emission technology plays a key role to take us to net-zero carbon emissions by 2050. And 82 per cent of the British public agree with us, believing that zero carbon emission flying is the best approach to truly decarbonise aviation.” 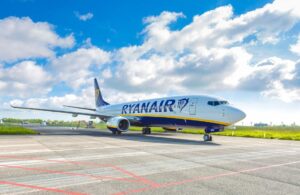 The “Sustainable Deposit Solution” was launched earlier this year and now Ryanair has partnered with investment bank Citi to become the first European airline to deposit funds in this initiative. According to Ryanair, this will enable the airline company to invest excess cash to support different sustainable financing projects across Citi’s portfolio, such as renewable energy, water conservation, healthcare and education in emerging markets.

Funds invested are allocated to finance or refinance assets in a portfolio of eligible green and/or social finance projects, based on the criteria set out in the Citi Green Bond Framework, Social Finance Framework and Social Bond for Affordable Housing Framework.

“Citi is helping our clients to progress their own ESG priorities by providing the opportunity to support eligible environmental and social projects in Citi’s portfolios,” said  David Tsui, global sustainability (ESG) head of deposit and investment products. “We are delighted to partner with Ryanair as the first European airline to deposit funds in our recently launched Sustainable Deposit Solution. We have committed to financing and facilitating $1 trillion in sustainable finance by 2030 as part of our goal to further the acceleration to a sustainable, low carbon economy.”

At a local level, Ryanair has also just announced that it is again partnering with “Renature Monchique”, with the aim of offsetting its carbon footprint. The project was launched in 2019 and, now in its fourth year, it has the goal of planting another 75,000 trees in the Algarve mountains. 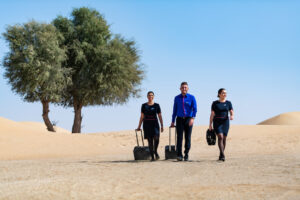 Earlier this month, Wizz Air announced that it had joined the Alliance for Zero-Emission Aviation (AZEA), a voluntary initiative launched by the European Commission to pave the way for next-generation sustainable aircraft.

Wizz Air joined AZEA together with a range of public and private aviation stakeholders, “united by the shared mission to decarbonise the industry by facilitating the successful commercialisation of hydrogen and electric aircraft”. To achieve this, said Wizz Air, “AZEA members will work together to identify barriers to advancing zero-emission aircraft, establish recommendations and a roadmap to address them, and promote investment projects.”

Also this month, Wizz Air signed a “Memorandum of Understanding” with OMV, the international integrated oil, gas and chemicals company headquartered in Vienna, for the supply of sustainable aviation fuel (SAF) between 2023 and 2030.

“The MoU gives Wizz Air the opportunity to purchase up to 185,000 metric tonnes of SAF from OMV. This cooperation ensures that Wizz Air can progress in accordance with its plan for the reduction of CO2 intensity per passenger kilometre.”

The CAPA “Environmental Sustainability Awards for Excellence” recognise airlines and airports that put climate change at the forefront of their business and strive for carbon neutrality.