Set slightly inland on the Alvor River (Rio Alvor), between Lagos and Portimão, is the fishing village of Alvor.

Alvor has undergone significant development in recent decades, but much of the building has been managed responsibly and kept fairly low-rise. This destination suits visitors looking for a simple, serene location with a laidback ambience.

The Old Town offers typical Portuguese charm with its narrow, cobbled streets. The riverfront and beach are attractive, and an alluring draw for tourists seeking a sun-kissed beach holiday.

Alvor is the ideal resort for a relaxing family holiday, offering a perfect combination of traditional fishing village charm and modern amenities.

Alvor suffered heavy losses as a result of the 1755 earthquake, but there are still interesting historical remains to see. It is also known, historically, as the town where King João II died in 1495.

As with other locations in the Algarve, Alvor enjoys long hot summers and pleasant spring and autumn seasons, with July and August being the height of the tourist season.

For tourists, Alvor pretty much closes down for winter (in October) and re-opens at Easter, and the town is extremely quiet during these colder months.

Faro Airport is 73 kilometres east of Alvor, less than an hour away by car.

Getting from Faro Airport to Alvor by public transport requires two buses and one long train journey and, depending on connections, this can take more than four hours.

The best way to get to Alvor from the airport is by private transfer, either by sharing a car or on one of the transfer shuttle coaches.

For day trips, there are regular buses from Alvor to Lagos and Portimão.

The riverfront is one of Alvor’s most idyllic settings. It’s the perfect place to sit and watch the world go by, as fishing boats come and go.

The harbour is delightful, lined with colourful boats and aromatic fish restaurants. With its location on an estuary, Alvor also offers protected natural wetlands to explore.

Elevated walkways that cross the sand dunes and mud flats are wide enough to cycle along – and the area is a haven for bird life. 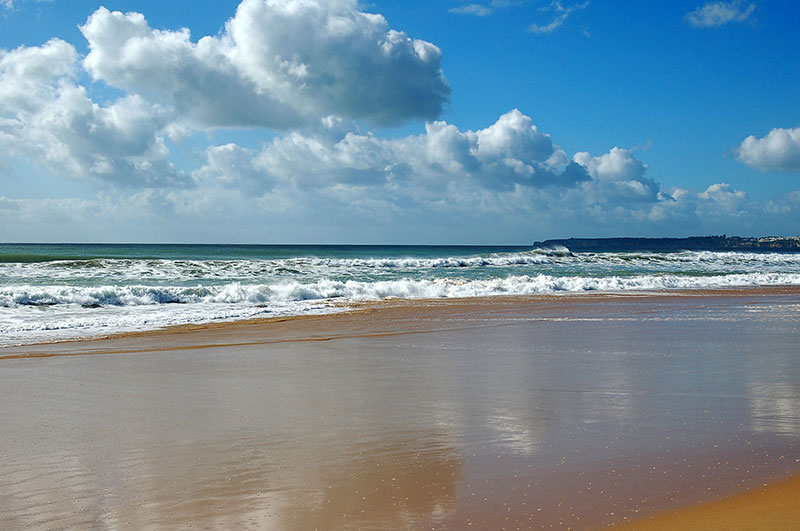 Walk to the east end of Alvor Beach and you will come to Praia de Três Irmãos, with its series of little coves and fantastic rock formations. “Três Irmãos” translated means “Three Brothers”, and this refers to three sea-stack rock formations that run across the beach.

Even at the height of the summer season, there is plenty of room on this extended expanse of two adjoining beaches.

There are several restaurants and snack bars on both beaches.

Cross to the other side of the estuary and you will find the sweeping beach of Meia Praia, which runs all the way to the harbour entrance at Lagos.

The castle ruins are a short walk up the hill from the harbour.

Alvor’s castle (what is left of it, anyway) dates to the 13th century, and it now houses a children’s playground.

The 16th-­century Igreja Matriz church rises above the Old Town, with its impressive Manuelline doorway and pillars carved into fishing ropes.

Wander around the pedestrianised centre of the old town and you will also find three Islamic shrines (morabitos), which are representative of the area’s Moorish heritage.

Most streets lead down to the waterfront.

When you have had enough of wandering around the Old Town and lazing on the beach, there is plenty to do in and around Alvor.

Take a canoeing trip on the Alvor River, hire a bicycle, or visit one of several golf courses within easy travelling distance.

Other activities include fishing excursions, dolphin-watching outings, and boat trips to see the caves around Lagos.

Day trips to explore the nearby beach resort of Lagos (Praia da Rocha) and the shopping haven of Portimão are must-visits from here.

It is easy to take a boat trip to Lagos, and Portimão is a mere 15-minute drive away.

As with most Portuguese coastal resorts, fresh fish is a staple offering at most restaurants, and there are some delightful restaurants along the waterfront.

There are also plenty of meat and chicken dishes on offer, and you can find many different international cuisines here – plus several Irish bars.