Praia da Luz is a popular and attractive beach resort in the western Algarve.

Officially known as Luz, the town has a warm welcoming feel about it and offers ample tourist facilities, restaurants and bars, as well as a wonderful beach.

Luz is much quieter than some of the larger, more vibrant Algarve coastal towns, and doesn’t attract rowdy drinking crowds.

It’s a relaxing and low-key traditional resort town that is popular with families, and home to a significant English expat community.

The main tourist season is from June to September inclusive, with July and August the hottest and busiest months.

Set on the coast about six kilometres west of Lagos, Luz is 93 kilometres and an hour away by car from Faro Airport.

Many tourists visiting here will arrive on coach transfers from Faro Airport, organised as part of their holiday package deal.

The coach journeys tend to take much longer as they stop at several hotels along the way. 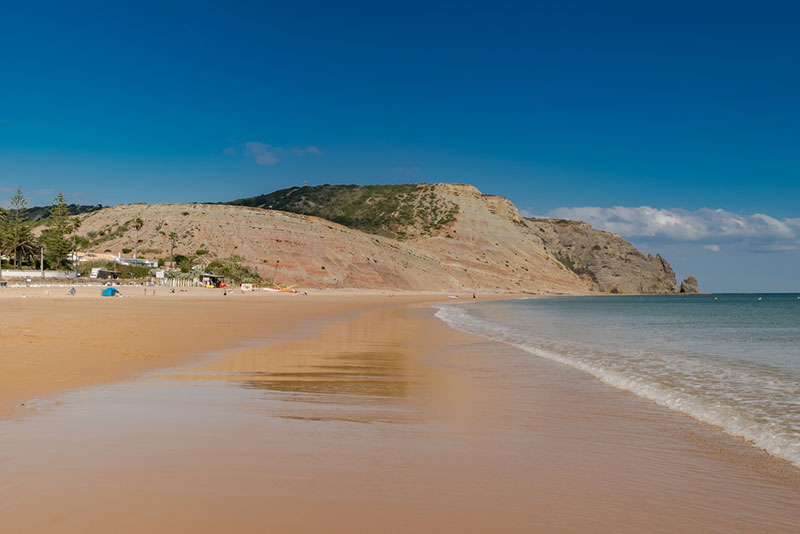 The beach here is one expansive stretch of sand under the steep cliffs of Rocha Negra, going all the way round the bay to the Fortaleza da Luz fort headland.

It is highlighted by soft golden sands and calm, clean seawater. During the summer season, the beach has lifeguard supervision.

Around the headland is a quieter secondary beach, Praia Prahina.

Next to the beach is an attractive promenade, with numerous cafés overlooking the beach. As you stroll along, you will find local artisans selling trinkets and holiday memorabilia.

Behind the promenade are the ruins of Roman baths, dating from the third to fifth centuries. 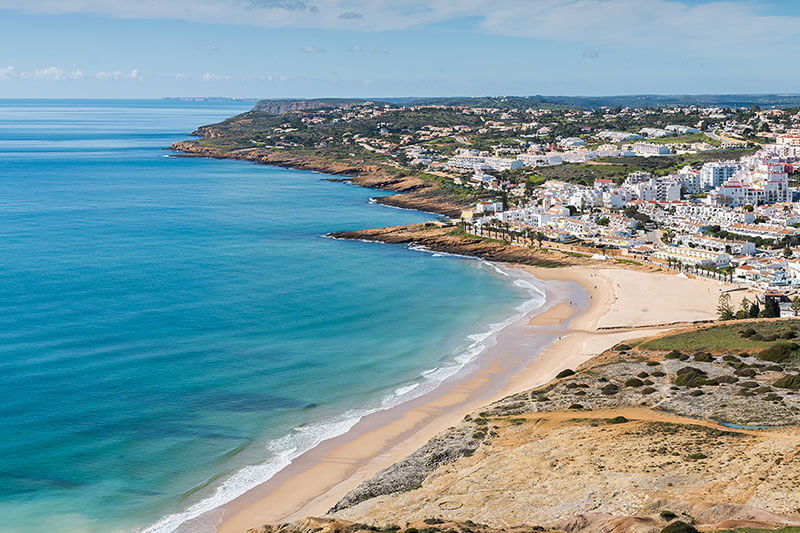 The massive granite cliffs of Rocha Negra are one of Luz’s outstanding natural features.

They provide steep and challenging hiking trails, but the climb is well worth it as the views over the town are spectacular.

There is a great diversity of cafés, restaurants and bars in Luz, and many of the resort hotels offer all-inclusive packages.

There is cuisine to suit all tastes and budgets, from international to local Portuguese dishes.

Lagos is one of the Algarve’s most attractive towns and is well worth visiting for a day out, with a regular and inexpensive bus service.

Lagos has a picturesque Old Town with whitewashed houses and cobbled streets and sights of historical interest. The Ponta de Piedade rock formations are definitely worth visiting while you are here, and the best way to see them is by a boat tour from Lagos.

For families, the zoo in Lagos is relatively modest but offers a great alternative to the beach for younger children.

The fishing village of Burgau is near Luz. A great way to get there is by hiring bicycles and cycling along the coast path.

Sagres, to the west of Luz, is also well worth a visit. It is an isolated village with a dramatic coastline, cliff-top fort and rugged headland.

The wind-whipped seas here are popular with the surfing crowd.

The Slide and Splash water park is about a half-hour drive from Luz.

This seasonal park has slides, pools and rides, as well as live falconry, reptile and tropical bird shows.