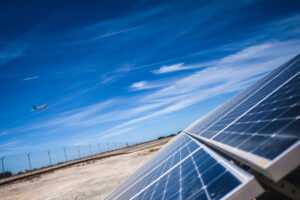 Faro Airport was in dual celebration mode when it commemorated the history of Portuguese aviation while also unveiling a major investment for future sustainability.

During a ceremony presided over by prime minister Antonio Costa and Nicolas Notebaert, CEO of VINCI Concessions and president of VINCI Airports, and attended by other local and national authorities, the airport celebrated the centenary of Gago Coutinho’s aerial crossing of the South Atlantic.

A Portuguese admiral born in the Algarve, Gago Coutinho was the first aviator to successfully fly across the South Atlantic in 1922, linking Lisbon and Rio de Janeiro (8,300 kilometres). Earlier this year, the national government approved plans to name Faro Airport in his honour, “underlining the importance of openness to the world in Portugal’s history”, according to a press release by VINCI Airports, the official operator at Faro.

Nicolas Notebaert also took the opportunity to announce the commissioning of a solar power plant at Faro Airport. With a capacity of 3MWp, it will – says the company – enable VINCI Airports to produce 30 per cent of the airport’s electricity needs, reducing CO2 emissions by more than 1,500 tonnes per year.

The first airport solar power plant in the country, it was financed, developed and built by VINCI Airports and is operated through SunMind (VINCI Concessions’ photovoltaic subsidiary). “This initiative is part of VINCI Airports’ global decarbonisation programme, which aims to achieve Zero Net Emissions by 2030 at airports in Portugal and the European Union – and 2050 at the latest for all its airports worldwide.”

Notebaert reported that Faro Airport recovered about 90 per cent of its 2019 traffic in the first half of the year, thanks to new services opened in recent months, notably with London Gatwick and Nantes Atlantique airports, also operated by VINCI Airports – “a dynamic that illustrates the recovery of tourism in Portugal, backbone of the country’s economy”. 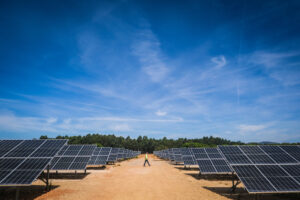 He said VINCI Airports’ excellent relationship with the Portuguese authorities “has enabled us to make the country’s airports ever more efficient and better connected, for the benefit of citizens, passengers and regions.

“As we celebrate the centenary of the South Atlantic air crossing, Portugal continues to write its history as a very attractive destination and a country that innovates for more sustainable mobility. We are very proud to be part of this new momentum by opening the solar power plant at Faro airport and rebuilding the country’s connectivity.”