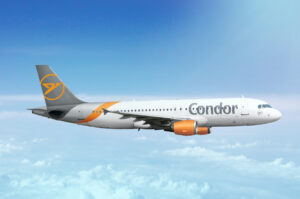 Tourists planning a summer holiday in the Algarve will be able to enjoy additional services to Faro Airport from throughout Europe.

Faro Airport will be one of Germany holiday carrier Condor’s new summer scheduled flights. Set to be launched on 29 July, the service will link the Algarve with Frankfurt on Fridays and Saturdays.

Officially announcing the new route, Condor said, “Faro is for many holiday-makers the starting point for round trips in the Algarve. The coast of the Portuguese region is especially known for fine sandy beaches and impressive rock formations. But Faro itself is also worth a trip. The city offers an authentic old town, the popular Praia de Faro beach and proximity to the Ria Formosa nature park, with its lagoons, beaches and numerous hiking and sports opportunities.”

An additional Tuesday service has been added to the Faro-East Midlands route as part of Jet2.com and Jet2holidays’s expanded summer schedules.

According to CEO Steve Heapy, “After the removal of all travel restrictions, international travel is looking like it did before the pandemic. This return to normal has led to customer confidence bouncing back strongly, with holidaymakers jumping at the chance to get away. As such, we are seeing enormous growth for all seasons, with summer 2022 proving to be one of the most popular times for a holiday. In response to that, we have added additional capacity to a range of sunshine destinations, providing customers and independent travel agents with even more choice and flexibility.”

After a break of two years, British Airways has now returned to international short-haul flying from Gatwick Airport, including its Faro Airport route.

Initially, services are operating under the British Airways Air Operators Certificate (AOC), then later in the year operations will be moved to a new British Airways-branded subsidiary, BA EuroFlyer, which is operating in a similar manner to the company’s existing subsidiary BA CityFlyer.

For live information about flight arrivals and departures at Faro Airport, click here.