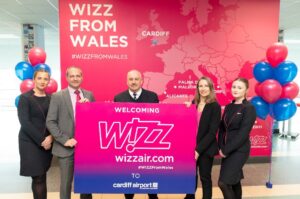 A new base in Cardiff launched by Wizz Air now offers “ultra-low fares” for flights to the Algarve. Faro Airport is one of nine routes to be operated from the base, which is the airline company’s fourth in the UK.

The launch follows last month’s announcement by the Algarve Tourism Association that Faro Airport is operating six other new routes from April, as well as reinforcing 10 routes to eight countries.

In addition to Faro, Cardiff Airport will be connected by Wizz Air flights to Alicante, Heraklion, Larnaca, Lanzarote, Palma de Mallorca and Tenerife, while services to Corfu are planned to start in June and to Sharm El Sheikh in November.

“This is a very exciting time for Wizz Air in the UK,” said managing director Marion Geoffroy, “as we celebrate the opening of our highly anticipated base at Cardiff Airport. By bringing our new and efficient Airbus aircraft to Cardiff, the wings of which are manufactured in Wales, we are providing a significant boost to the Welsh economy and creating jobs.

“The base… will bring further connectivity to the region, with passengers in Wales and the South West of England now able to take advantage of our ultra-low fares to ‘fly local’ to their favourite getaways. We’ve been busy building our Cardiff team, and as we continue to recruit we encourage those looking for their next adventure to apply today. We look forward to the upcoming summer season, as we welcome new passengers with affordable, direct flights to popular holiday destinations.”

Added Cardiff Airport CEO Spencer Birns, “We’re delighted to welcome the opening of the Wizz Air base today, as it marks a real turning point for the airport in its post-COVID revival plans. Our customers in Wales have been asking for a more cost-effective choice for many years. What makes this launch so exciting is that Wizz Air is an ultra-low-cost airline that will help build competition and offer improved choice to people living in Wales. This is because of Wizz Air’s ultra-low fares – from as little as £12.99 one-way.”

Passengers planning a Wizz Air flight to Faro can book tickets with the airline’s travel insurance package, which includes COVID-19 cover and WIZZ Flex, allowing for flights to be cancelled up to three hours before departure – “without any fee and receive 100 per cent of the fare immediately reimbursed in airline credit”.

Earlier this month, Wizz Air also announced 18 new routes from its Gatwick base, including Faro.