This attractive fishing village set into the cliffs has become a tourist hotspot. Whitewashed houses cascade down the cliff and converge in a picturesque central square behind the beach and cove. 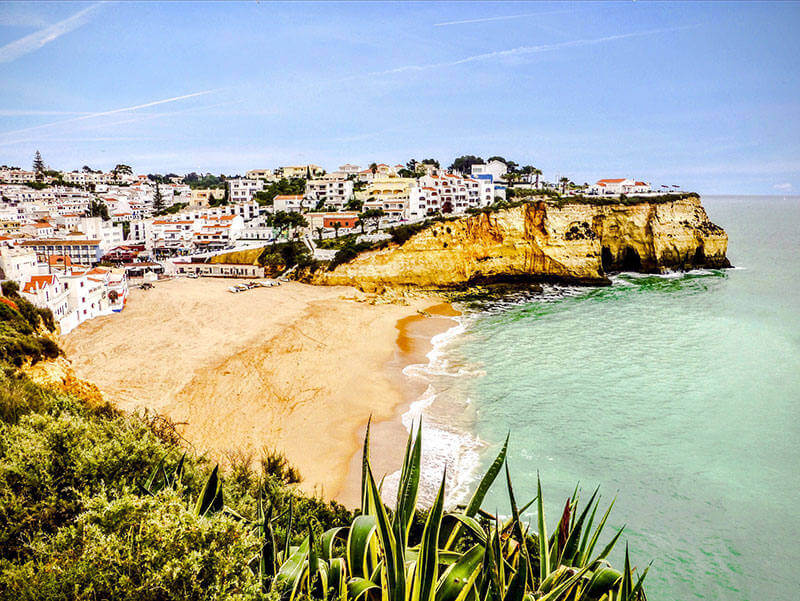 Carvoeiro has mushroomed in recent times to accommodate an increasing number of tourists who flock here in preference to some of the larger and more “hedonistic” resorts, such as Lagos, Praia da Rocha and Albufeira.

It is prettier and smaller than other Algarve beach resorts, but is packed full during the high season.

The fishing village is now accompanied by an increasing number of self-catering apartment blocks, although it still retains touches of its original charm.

Carvoeiro is a favourite with families, largely due to its relaxed atmosphere and sensibly priced accommodation available in the village.

The height of the summer season is July and August, but June and September are almost as busy.

Pre-booking accommodation is recommended, as it sells out during the busy summer months.

Travelling by road from the airport takes around 45 minutes on the A22 motorway.

If you are travelling from Faro Airport to Carvoeiro and need transport options and information, check out our transport guide.

To the west of the town is an old ruined fort. It was built in 1670 as part of the Algarve’s coastal defences, but little of its original form remains.

However, the site is also home to the shrine of Nossa Senhora, a chapel overlooking the sea, which is said to pre-date the fort and is well worth a visit.

Head east from the beach and you will see the incredibly impressive rock formations of Algar Seco.

There are steps cut into the cliff which lead down past dramatic overhangs above blow-holes and grottoes. 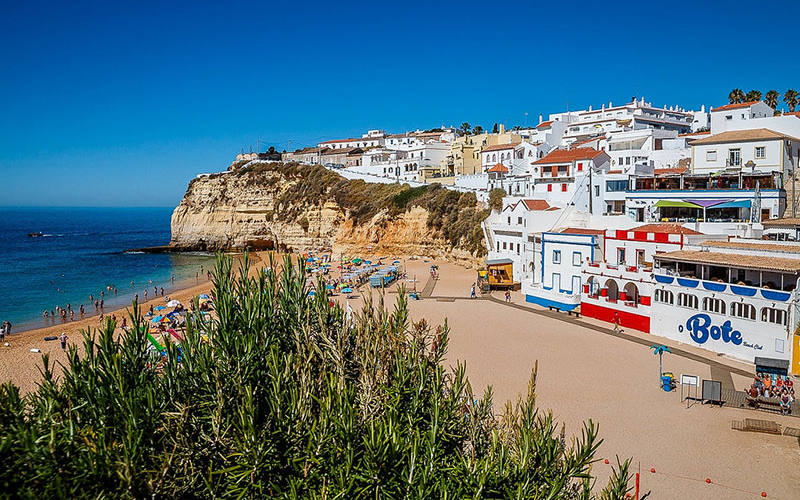 Though attractive, the sandy and sheltered central beach, Praia do Carvoeiro, isn’t excessively big and it becomes extremely busy during the high season.

There are numerous facilities here, such as toilets, showers, places to buy snacks, and water sports.

The only other beach in Carvoeiro is the small Praia do Paraíso (Paradise Beach). There is very little sand at high tide and few facilities, although there is a restaurant open all-year-round perched high on the cliff.

The neighbouring beaches are gems and definitely worth making the effort to visit.

Praia de Vale Centeanes is just a few kilometres east along the coast, and further on is Benagil. Continue along the coast from Benagil and you will reach Caramujeira with its picture-postcard beach, Praia da Marinha.

You will need a hire car to explore some of the best coves and beaches along this stretch of the Algarve.

Boat trips are hugely popular, and are the best way to view the beautiful rock formations and sandstone cliffs so typical of this part of the Algarve.

Boat trips also take you to mystical caves and grottoes, as well as hidden coves.

There are several excursion companies that operate from Carvoeiro, including the popular cavern boat trip.

The Grutas de Benagil cave is a must-visit – one of the most photographed caves in the whole Algarve area.

There are many bars and restaurants in Carvoeiro catering for all tastes and budgets. Seafood is a big part of the town’s culture so you will find plenty of great fish and seafood restaurants.

Many of the town’s restaurants have outside eating areas.

The Lagoa area is famed for its wine production, and bars and restaurants in Carvoeiro serve excellent local wines.

This stretch of the coastline is a fabulous area for hiking. There are numerous trails that follow the steep hills and sheer cliffs along the coast.

The O Percurso dos Sete Vales Suspensos trail is one of the most famous routes. It extends for five kilometres from Praia da Centeanes to Praia da Marinha.

For a more leisurely stroll, take the boardwalk from Carvoeiro to the rock formations of Algar Seco.

The Algarve is renowned for its golfing facilities and at Carvoeiro you won’t be disappointed.

Carvoeiro is a favourite golfing destination, with several courses to choose from nearby.

The nearest are the 18-hole Gramacho and Vale da Pinta courses and nine-hole Vale de Milho.

Interesting day trips from Carvoeiro include Silves, Portimão and Lagos.